For, as the Roman Empire fell, as all through Europe matted, unwashed barbarians descended on the Roman cities, looking artifacts and burning books, the Irish, who were just learning to read and write, took up the great labor of copying all of Western literature — everything they could lay their hands on.  . . . Without the Mission of the Irish Monks, who single-handedly refounded European civilization throughout the continent in the bay and valleys of their exile, the world that came after them would have been an entirely different one — a world without books.

Churches and monasteries were being built in County Fermanagh from at least the 6th century. They were especially densely concentrated on the islands and shores of Lough (Lake) Erne, which divides the county at a diagonal. The islands of the lake may appear remote today, but in Early Christian times Lough Erne was a great highway, providing a route from the ocean near Ballyshannon deep inland into Ireland.

Devenish (daimh-inis, ox island) is an L-shaped island of 70 acres at the southern end of  Lower Lough Erne, 1.5 miles downstream from Enniskillen.  Ballycassidy is approximately 2 miles north of Devenish Island on the eastern shore of the lake.  The ruins of a monastery, two churches, an oratory and one of the finest round towers in Ireland occupy a sloping hillside on the southeast tip of Devenish.

One century after St. Patrick’s death and paralleling the growth of monasticism in Ireland in the sixth century, St. Molaise (whose death is recorded in the Annals of Ulster in both 563 and 570 A.D.), founded a monastery on Devenish Island.   The story is told that St. Molaise, resting from his labors, listened spellbound to bird song that was the Holy Spirit communicating.  The reverie lasted a hundred years, and then St. Molaise looked around after the interval and the monastery had been built.

The early Irish Christians’ belief in the supernatural had deep roots in the Celtic religion, and early saints were regarded as a more powerful Druid.   Other stories attributable to St. Molaise give him a magical rather than spiritual or moral authority.  Legends claim that during a snow storm on a visit to Tara, St. Molaise’s tent alone was free from snow. “The most excellent fire of divine love in him made the snows to melt.”

In 650 AD, the poet Cuimin of Conor described Devenish as a “house of hospitality for everyone in Erin.”  In the monasteries, sacred and secular manuscripts were continually copied and illuminated.   The monasteries, however, were not solely institutions for adults.  Children were educated and fostered at monasteries.  Education began at the age of seven with the Psalms, using wax tablets and styli.

Early monastic settlements also functioned as nearest equivalent towns in Ireland at the time.  In addition to the monastery, church, and refectory, contained on these sites often were a guest house, school, mud huts, and dairy and farm lands.

Lough Erne sites were vulnerable to Viking waterborne attacks.  The Annals of Ulster record that in 836, “all the churches of Loch Erne, together with Cluain Eois and Daimhinis (Devenish Island) were destroyed by the gentiles.”  Again in 923, the Annals note:  “a fleet of foreigners on Loch Erne and they plundered the islands of the lake and the territories round it to and fro.”

The monastery was reestablished after these invasions and became increasing involved in secular affairs and local troubles.  Its churches were burned in 1157, and a local king’s son was killed by his kinsmen in the round tower in 1176.  Round towers are a feature of Irish monasteries rebuilt after the Viking invasions.  The towers served as monuments to the faith and were used for the safe custody of monastic treasures in time of trouble.  The tower at Devenish Island still retains stone hooks from which the leather satchels containing reliquaries could be hung.

The most important relic from Devenish Island was created during this period.  It is the Soiscel Molaise, or book shrine of St. Molaise, which now in the possession of the Republic of Ireland National Museum.

Unfortunately, the gospel contained in the rectangular case is lost.  Such shrines were so important that hereditary stewards were given responsibility for their care (although they were also carried into battle).

In the twelfth century, the Irish monastic church gave way to a church governed by bishops and organized into dioceses, parishes and reformed monasteries.  On Devenish Island, the old monastic community survived as secular priests called Culdees (coledei) serving the lower church on the island dedicated to St. Molaise and ministering to the parishioners.  In the later middle ages, the term Culdee referred to small ecclesiastical communities following no recognized Rule.

With its access by water and its proximity to the borders of Ulster and Connacht provinces, Devenish served as the host site for various treaties, commissions and assizes.  In 1259, Hugh O’ Connor, King of Connacht, and Brian O’ Neill, King of Ulster and recognized as high-king of Ireland, agreed at Devenish to unite against the English.   One year later, they were defeated by the colonists at the battle of Down, where O’ Neill was killed.  Despite this defeat large expanses of Ireland and, in particular, Ulster province, remained under the control of Irish chieftains until the beginning of the 17th century.

The Gaelic Revival and End of the Monastery

The ruins of the upper church (the remains shown in the above far right photo) is characteristic of Irish 15th century Gothic architecture.  This was the priory of the Augustinian Cannons Regular, and popularly known as St. Mary’s Abbey. Thus, described as “an anomaly” in the history of Irish monasticism, on the small island of Devenish two religious houses operated, Culdee and Augustinian. 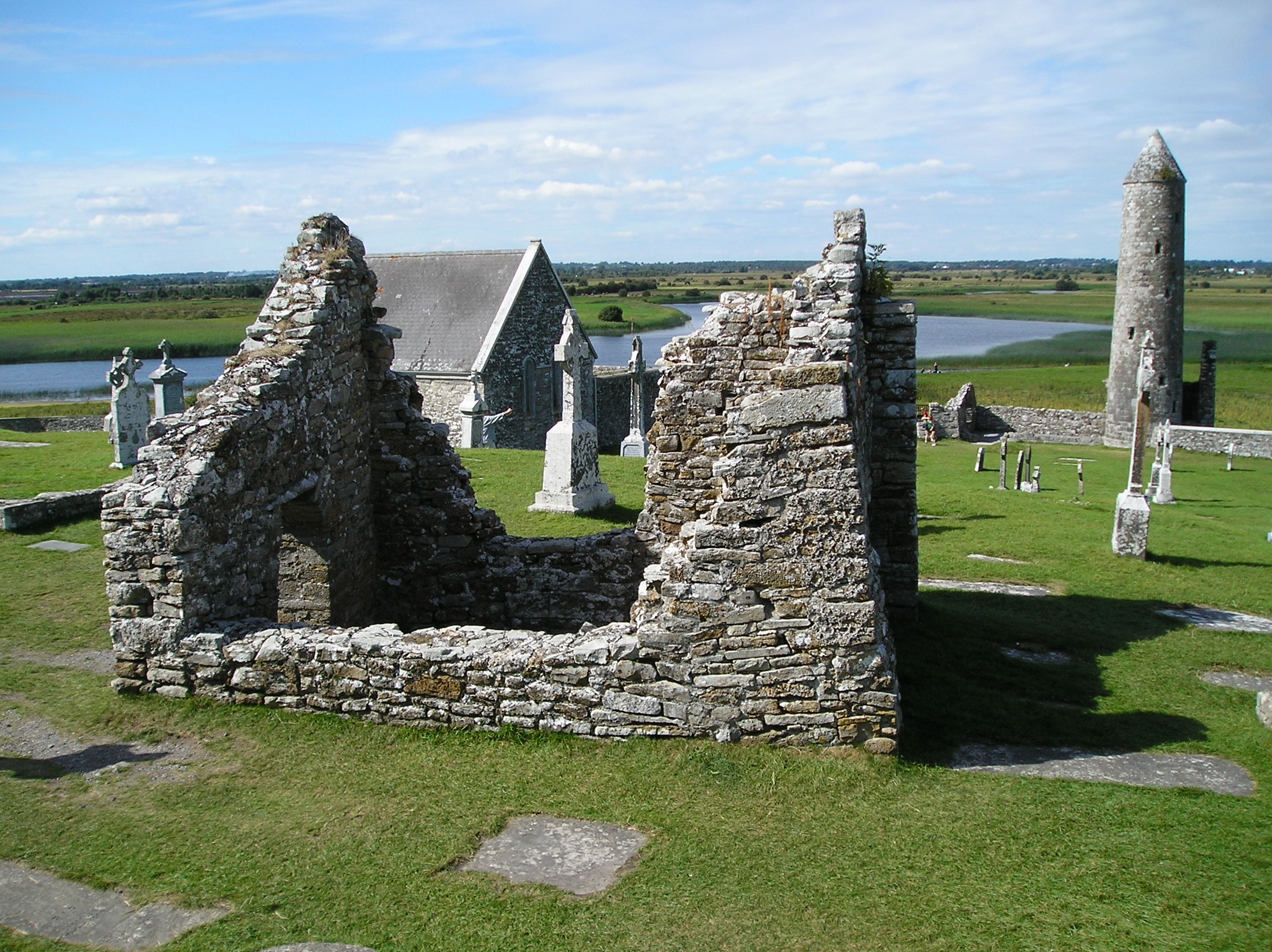 The Reformation and defeat of the Ulster Irish Chieftains by the English brought both communities to an end in 1603.  Parish worship moved off the island in 1630, by which time Devenish had become part of Sir John Davies’ estate. The cemeteries, however, were used into the nineteenth century, and Devenish is now under the government’s care.

The Cassidys served as “erenaghs,” hereditary land managers for the Church’s property in parts Devenish parish and undoubtedly studied and worshiped at Devenish Island.  The Tully (Ó Taithligh) and Casey (Mac Cathasaigh) families were also erenaghs in Devenish parish.  The records for the monastery show several Tullys as abbots and long history of O’ Flanagans as priors.

The most famous early Irish Cassidy ancestor, the poet Giolla Mochuda More Ó Caiside, composed Banshenchas, The Lore of Woman, on Devenish Island in 1147.  The poem tells the history of the women of the world starting with Eve.  At the conclusion of the poem, Devenish is described as “of gracious words and pure holy song.”

In the cemetery on Devenish Island closest to the shore, there are gravestones with the names of Cassidy physicians and priests dating back to the early 1700’s.  Both on Devenish Island and in nearby Ballycassidy there are holy wells connected with St. Molaise, which prior to the introduction of Christianity in Ireland may have been sites of worship by Druids of their water deity.

The island is accessible by a ferry running throughout the day from April-September (except Mondays, unless the Monday is a holiday, and then closed on the following Tuesday).  Take the A32 from Enniskillen north to the B82 to Kesh, and immediately thereafter  look for the sign indicating the Devenish Island ferry down a narrow country road (on your left from Enniskillen).  In addition, the MV Kestrel tour lake starting from the Round ‘O’ Jetty, at Brooke Park in Enniskillen.  The tour includes a stop at Devenish Island.

We recommend contacting the Fermanagh Visitor Center for current information on planning your visit to Devilish Island.