Cassidy – Ó Cassidy – Ó Caiside is an ancient Irish name.  In the United States, many Cassidy variations exist, including Cassity, Cassedy and Casada.

All Cassidys originate from Lower Lough (Lake) Erne region of County Fermanagh, Northern Ireland.  For centuries, Cassidys were prominent in the arts and fields of medicine and religion.  Like other professional families, over time they moved to other parts of Ulster province and across Ireland.  With emigration, Cassidys traveled to, married, and raised families in the U.K., U.S., Canada, Australia, New Zealand, and a host of other nations.  Eventually, one Cassidy descendant, Bill Clinton, became the President of the U.S.

The origin of Ui Caiside, the Cassidys, remains unknown.  There is a dispute as to whether they belonged to the Fir Manaigh, the first Celtic settlers of County Fermanagh, or migrated to the area in the sixth century A.D. during the time of St. Molaise who founded the monastery at Devenish Island.  Ui Caiside was closely linked to the monastery and had access to its school at a time when education was denied to most.

In his analysis of the family, the late Father P.O. Gallachair, a historian of the region, wrote,

Soon the Ui Caiside name was renowned, but unlike most ancient Irish families their fame was never won in mere physical feats of arms, in blood and tears.  Theirs was a higher, more noble fame.  They were men of peace, culture and scholarship.

From the earliest times the Irish physician was attached to the clan or house of a chieftain, and the profession of the physician passed from father to son just as did the profession of the other arts and crafts in Ireland.  While this hereditary character of medical practice existed in other countries, in Ireland, it persisted until comparatively recent times.  Thus, there were the Ó Cassidys of Fermanagh, the Ó Callenans of Desmond, the Ó Lees of Connaught among the leading Irish medical families.

The Annals of the Four Masters notes the death in 1504 of Pierce Ó Cassidy of Coole in Fermanagh, “the son of Thomas, chief physician to Maguire, a man profoundly versed in literature and medicine, and who kept a house of general hospitality.” Other principal Ui Caside physicians were Finghin (d. 1322); Gilla na nAingel (d. 1335); Tadhg (d. 1450); Feonis (d. 1504) and Feidhlimidh (d. 1520). All are mentioned in the Annals of Ireland as ollamh leighis or professors of medicine.

The death of Feoris is recorded somewhat fully in the Annals of Ulster:

O’Cassidy of Ceul died this year-that is Maguire’s Ollave physician and a well tried doctor in learning and physic in theory and in practise and a man who kept a house of general hospitality for every one and he died of Cruith an Righ.

This disease was a sickness of unknown identity which is mentioned several times in the Annals as occurring in epidemics. The name (King’s Game in English) may arise from the belief that, like the King’s Evil, it was curable by a royal touch.

Although the hereditary nature of the profession created pressure for medieval Irish physicians to reside close to their patron chieftain, Irish physicians traveled extensively.  In the 14th and 15th centuries, many went to continental Europe for training and brought back medical texts used centuries later.  They also frequently traveled around Ireland to exercise their skills and extend their knowledge.

In the 16th century it was more typical for Irish doctors to study in schools established in Ireland or Scotland.  Often each medical family compiled, and handed down to succeeding generations, medical manuscripts for their own use and for fellow doctors.  From this period, Cassidys are identified as the authors of many medical tracts.

One manuscript, written by An Giolla Glas Ó Caiside between 1515 and 1527, still exists and is in the library of Corpus Christi College, Oxford.  It contains scientific commentary on a wide range of topics including medicine, philosophy, astronomy and botany.   Later famous Cassidy physicians include Dr. Felix Cassidy, who served in the Jacobite Court in France.

Heritage as Priests and Scholars

Cassidys were noted as “a most prominent, and is some ways a unique house, a people apart.”   This acclaim stemmed in part from their long history as priests and scholars in the Diocese of Clogher, especially during the suppression of the Roman Catholic Church under the Penal Laws of the 18th Century.

Catholic church divisions did not conform to county boundaries.  The Diocese of Clogher contains most of County Fermanagh, all of Monaghan, parts of Donegal, Tyrone, and a small piece of Louth.

The most important early Irish Cassidy priest and scholar was Ruaidhri Ó Caiside (Rory Ó Cassidy, died 1541), the archdeacon of Clogher.  In 1525, Ó Caiside compiled the “Register of the Diocese of Clogher.”  He also carried on the work of Cathal Óg MacManus, who died in 1498, in the compilation of the “Annals of Ulster.”

The Annals are one of the most significant Irish texts from the later middle ages, containing a reliable record of events of local and national significance along with information on family relationships, men of learning, and social development.  In the entry for 1541, it reads,

Rory Ó Cassidy, this is the Archdeacon of Clogher, died this year.  And it is he who wrote the greater part of this book [the “B” copy of the annals], a man who was full of knowledge in every science, both law and divinity, medicine and philosophy, to the time of his death.

Less noteworthy, but certainly colorful (and possibly bearing traits found within a Cassidy you might know today), was Maurice Cassidy, a Franciscan born in 1745.  A contemporary claimed he was

a boisterous, fire eating Ulsterman who was not above using fisticuffs to emphasize his commands, and who was left in office only one year.

The contribution of the Cassidys to the priesthood originated from their position as one of the hereditary “church families” in County Fermanagh.  Prior to 1600, large parts of Ireland, including one-sixth of the county in the Maguire period, were owned by the church.

Local families, however, possessed the estates surrounding the churches and monasteries.  The chief of the family bore the title of “erenagh.”  A single church with extensive lands might have several erenaghs, each erenagh controlling a separate part of the church’s lands.

The inhabitants of the church lands were accorded many of the privileges of the clergy, such as immunity from secular taxation, neutrality in time of war, and freedom from military service.  With the transformation of the Irish church in 12th century from a monastic church to one based on a diocesan and parochial system, these lands vested in the local bishops.

In return for continuing possession of the lands, the erenaghs paid the bishop an annual rent and many specific tributes and services, including a night’s lodging and entertainment for the bishop and his train.  Erenaghs also maintained the local church and were obligated to provide hospitality for “pilgrams, strangers and poor travelers.”  The members of erenagh families enjoyed a quasi-clerical status, and a greater part of the clergy was recruited from these families.

The earliest renowned Cassidy poet was Giolla Mochuda Mor Ó Caiside (also identified as Gilla Mo Dutu ua Casaide).  He may be the first Cassidy identified in the historical record.

Before the Maguires assumed control of Fermanagh, Ó Caiside was famed among the lir léighinn, the men of learning of Ireland “for all that was superior in Gaelic literature.”   Ó Caiside wrote in 1147 the poem Banshenchas (The Lore of Woman), which tells the history of women of the world. 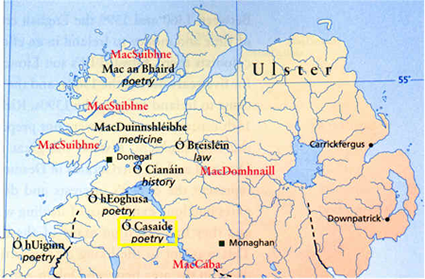 Still widely read and sung is the poetry of Tomas Ó Cassidy, “An Caisideach Ban” or the fair-haired Cassidy.   Ó Cassidy was an 18th Century Augustian friar expelled from the friary, in his own words, “on account of a bad senseless marriage.”

Ó Cassidy spent the rest of life wandering across Ireland and Europe as a poet and renegade priest.    Ó Cassidy’s most famous poem is An Caisideach Ban, which, as stated on one Irish album, is “sung the length and breath of Ireland.  It is the story of Cassidy, a priest, who lusts after a fair maiden and his final wish on his death bed would be to get a kiss from her.”